The current show at the BCA is one hell of a mythbuster. It is an enlightening show into the history of Black Britain. It is also a show about the value of the archive (yes, this particular one, but The Archive in general), and its importance in historical narrative.

It is also a highlight in the value of collecting privately for public use. Particularly collecting to your interests and of your own voice.

The BCA archives don’t have the weight of massive institutions – but they have a focus that means they have the capacity to ask difficult questions and challenge previously-held public opinion. And in this show, they definitely do.

This show focuses on black lives during the Georgian period – a period where Britain’s cultural influence on Black lives was primarily felt in the plantations of enslaved Africans in the Caribbean and in the colonisation of African nations in the ‘Scramble for Africa’.

There is a lazy British history – still generally – held that there were no Black people in Great Britain until The Windrush arrived in 1948, full of Caribbean ‘migrants’ here to look for work.

The show at the BCA actively disputes this history. It draws from its own archives, in conjunction with private art collectors, the National Archives and publicly accessible records, to show the story of Black British culture in Georgian times – centuries earlier.

There were some incredible stories, portraits and busts of literary and cultural heavyweights: Ignatius Sancho, Ottobah Cugano and Olauhda Equiano – key figures in black culture and collective change for Britain as a whole. 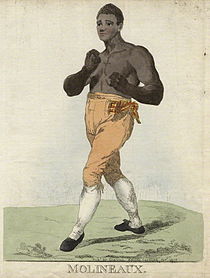 Several featured prints – those of East London life which black faces, and portraits of boxer Tom Molineaux  (like the one above, published by Tom Dighton) – were on loan from collector Leslie Braine-Ikomi, a well known collector of images of the African Diaspora from the 1700s to the mid-century.

It is obvious that, working with such a collector, the narrative and scope of exhibitions such as these become even richer – able to reach more people’s hearts and minds, prompting a new relationship with history through the contemporary art at the time.

In walking slowly through the exhibition, it is also apparent that this kind of wealth* has multiple benefits – being able to portray an accurate history (not leaving Black history up to the predominantly white male collectors), being able to contribute to public collection and share the wealth, plus earn more income from those collections (via loan fees and royalties) which in turn enables the collection of more artefacts for her collection.

It was surely an inspiration to this generation, some 300 years down the line, to know history, make art and collect art. To support the artist in speaking to history, and to be a bold part of whose history is supported.
*using this term to include the owning of valuable art and artefacts, jewellery, property, etc.