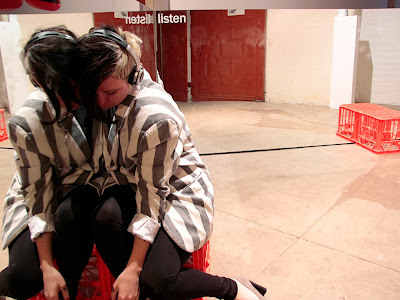 This one is about listening to stories.

Unlike another well known one-on-one performance festival, Proximity, this is just about listening to stories. Sometimes that is shared with another person, sometimes just on your own. My initial reservation at having to ‘share’ my intimate experience passed very quickly, as the intimacy of listening with another person became actually quite delicious and, considering the kinds of stories we heard, also a bit of relief.

Toby, cancer and other bedtime stories
Sitting cosy on the back steps, the first story I heard was from artist Toby Peach, who, in his fairly young life, has managed to beat lymphoma twice. Although intense, this wasn’t a sob story – thankfully – but a heart-warming and honest appraisal of negativity, taking responsibility for health and the gob-smacking brilliance of the human body.

Amaara, her red shoe and other fairytales
In a sweet laundry setting, lit by candles (as were most of the rooms), dancer Amaara Raheem told an hilarious story about her relationship between London and her daily commute to work, through an upside-down extension of the Hans Christian Anderson story of the little red shoes. It was personal, engaging, humourous, without being facile or jokey mc joketown.

Jade, her escape from uganda and her “5-star” stay in Yarl’s Wood
This was a harrowing, but all-too-common story of Jade’s life and escape from Uganda, corruption, the military and the Lord’s Rebel Army.
It was a story of her husband, children, twin sister and nieces being killed.
It was a story of dehydration, hunger, deprivation and  hiding.
It was a story of kindness and eventual passage to London.
She spoke of her time in a detention centre as a ‘5-star hotel’ with 3 meals a day, doctor’s nurses and places to chat with others and children to play.
As a couple of naive white gyals sitting there, the disparity was as loud as a sub-woofer, but there was zero resentment, only gratitude at her story being heard.

It was the best use of storytelling and the arts in politics I’ve experienced to date.

Other stories of self-indulgence
Most of the other stories I heard – although I enjoyed them – felt, in comparison, a bit, well, whingey.

Love stories in London, stories of heartbreak and loss in London, homelessness (although that was actually a bit less-so) – they all felt a little self-indulgent. Pretty much the same kind of story we always hear. And sometimes more like therapy and catharsis, than a story.

I spend a lot of time listening to people’s personal stories each week and they find a lot of solace from sharing them. But they’re not art, or theatre, or even really very interesting to that person or me. Usually I’m only interested because I have similar problems and am looking for identification. It is more intimate than being an audience, but still relatively mundane.

Which is why i found the three I mentioned much more valuable as art.

Having said that, the act of listening to others was comforting.

The combination of being with another person, knowing that I was part of a whole group, but not ‘in’ that group and well-supported in my journeys (logistic, emotional and intellectual) by the staff at BAC – a really worthwhile sense of togetherness and community.

Some of the other trimmings of the evening were perhaps a little unneccessary, but overall, an excellent way to enrich your night.