This was originally a post about Lily Allen’s tone-deaf video: Hard Out Here. But, well, who needs yet another mouthy white woman’s opinion on the subject, really.*

So I’m going to do what I do better – write about art.

Specifically about two recent exhibitions speak with a little more nuance about some of the issues that Ms Allen was trying to portray in that racist piece of shit video. Oops? did I really say that.

Anyway, back to it: Sarah Lucas and Kehinde Wiley.

Sarah Lucas at the Whitechapel.

…and it’s all about bitches. It’s all about the images, the violence, the tawdriness of the same-ol-same-ol images of women’s bodies, men’s bodies – the same blah blah bullshit we’re all just a little bit sick of seeing.
Maybe you’re not sick of seeing, but I am. Friends of mine are. In fact, my first visit to the show was with a friend who is battling depression because of the hatred she has about her body because it doesn’t ‘fit’ with what ‘should’.

Anyway, it’s all there in the gallery. Just there. In all kinds of detail. with varying levels of humour, finesse, mess and message.

It is refreshingly unsimplifed – in fact, it’s all over the place.
It is probably ‘sanitised’ for the general Whitechapel Gallery-viewing public, but even with that in mind, it’s not a perpetuation of the ‘good girl’ imagery. But neither is it so erratic that there isn’t plenty of room to read her messages about images of women.

About the control of our own image, and who has it.

Although this isn’t a post about the video, I do think this image says some of what Ms Allen WAS trying to get at with her BAGGY PUSSY imagery, but with a whole lot finer detail. It is hard being that bitch. 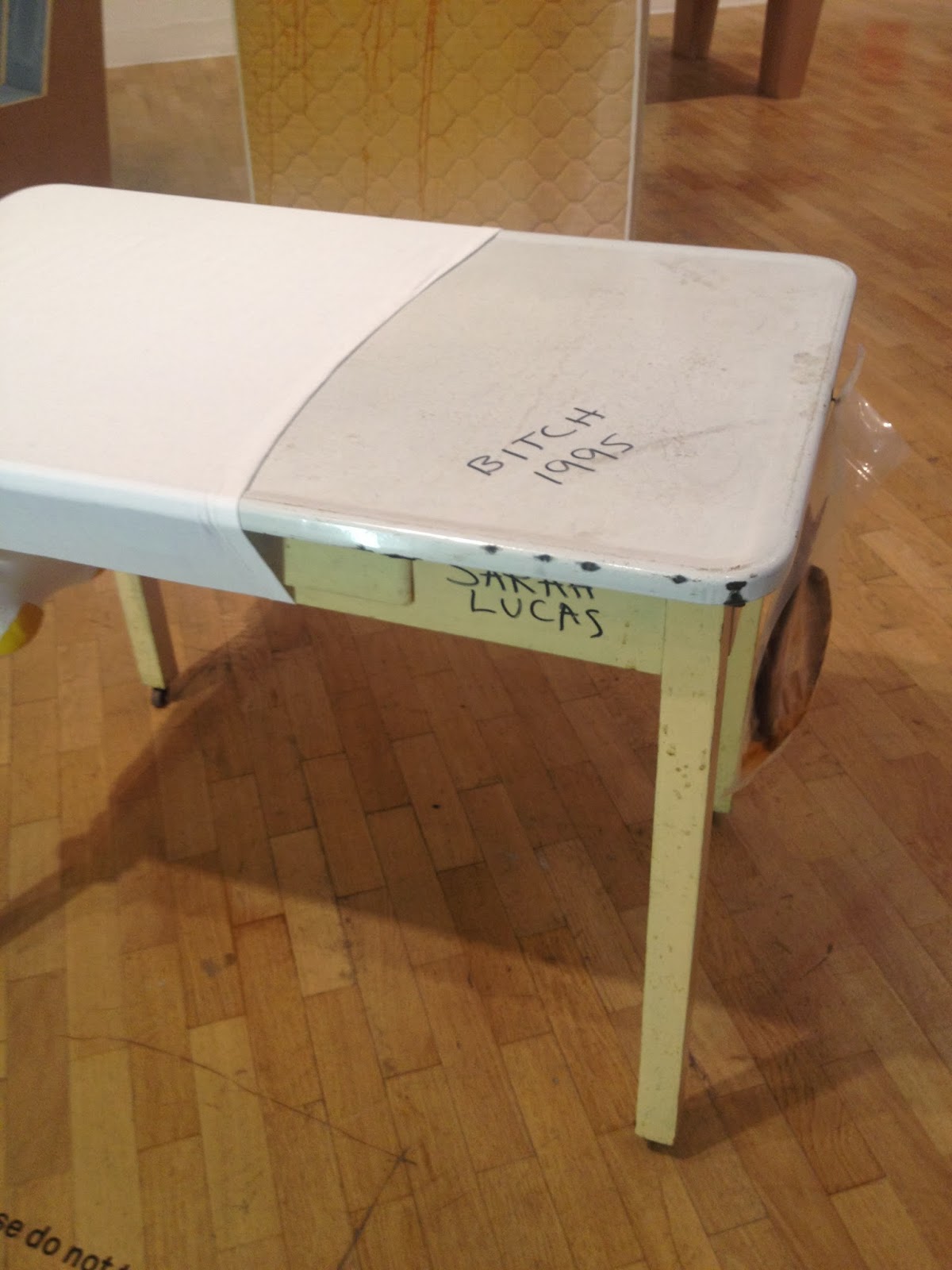 Having said that, Sarah Lucas is a white, middle class woman who presents a fairly singular image of Woman.
But for that, it’s relentless. And consistent. She portrays the violence of gender symbolism, makes fun of the entendre – the guardsman of language – and rides it like she’s going to come any second.

The variety of materials is also refreshing: sculptures, readymades, drawings, wallpapers, prints, mechanical wanking cocks (a material type all of its own), photography and text. And on that front, it is not singular.

It was a relief to see the savageness of her response to the same old sexist bullshit about the female form.

Personally (and currently up to my back teeth with it all), it is an exhibition which says ‘It’s ok honey, i feel the same way’.

The work takes up so much space, too. It gets into every bit and there’s not enough space to spread out and because of that, do make plans to see the show twice.

Before anyone whinges about it, I don’t think the antidote is to give more space. I think the slightly-claustrophobic feeling of the show perfectly demonstrates a) the intensity of being an artist: you have a thousand things on the go at the one time and there’s no space from it. You can’t walk back from your life. b) same thing about being a woman. Your imagery and the intensity is relentless, there isn’t a break from it. You don’t get to take a 10 minute breather, walk back and see how it feels to not have all of the ‘requirements’ and ‘opinions’ and ‘representation’ in your face. So why should you in an art gallery?

The first time I saw Kehinde Wiley’s work was in his Black Light book at the Deutsche Guggenheim in Berlin (note the caption: I still REALLY want this book.)

The show at Stephen Friedman gallery last month was his work from Jamaica. Floral, Patterned and Beautiful. Part of his ongoing series from around the world – especially places that have significance for (young male) figures unseen in the former colonies: Israel, Africa, Brazil.

This is one of my favourite: all pattern everything. 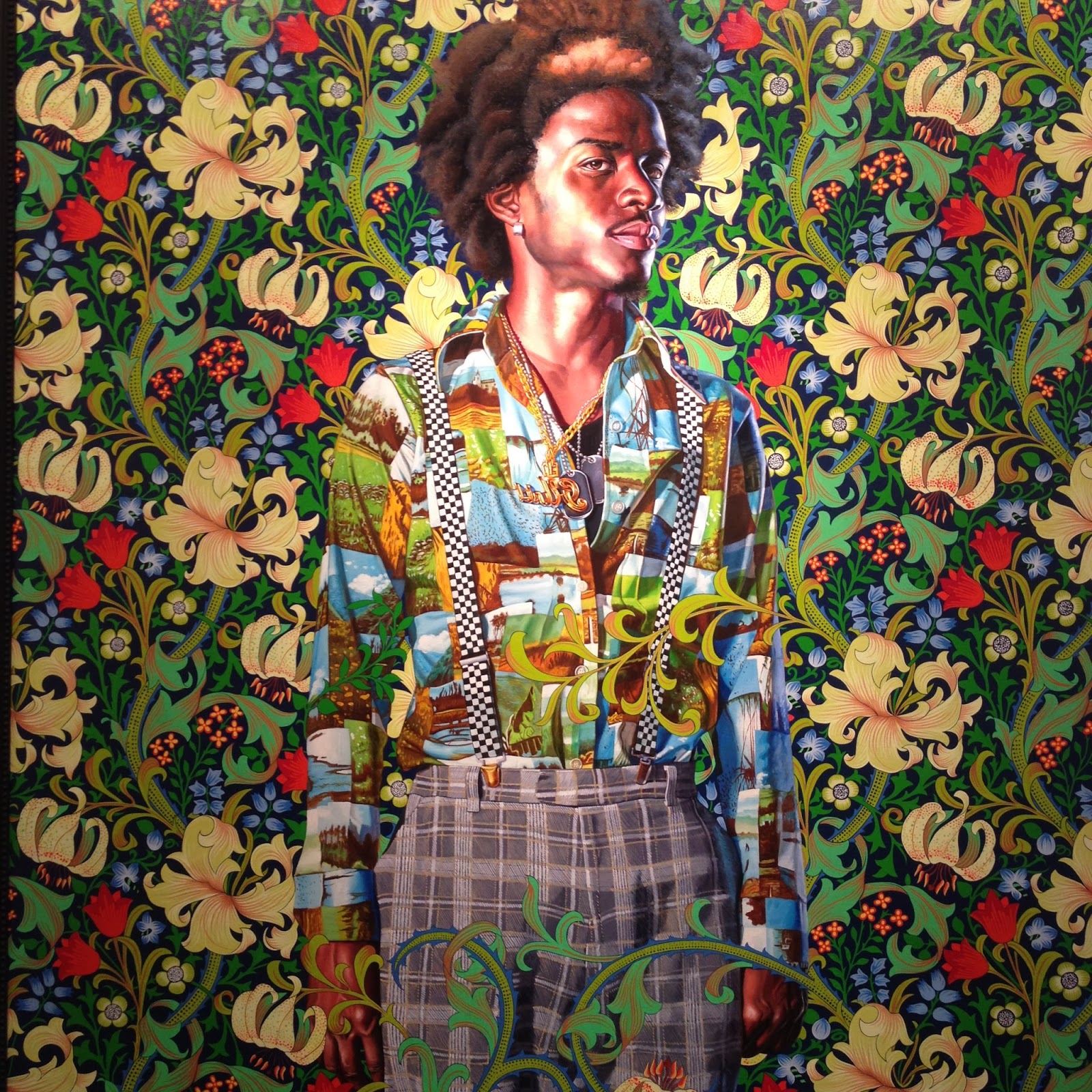 I love the OTT of it all. Yes, posed staring out in a fairly straight-up pose, but bursting with life and colour and yowsers!

Unlike previous works of his and other shows I’d heard about/seen, this show included the ladies. In fact, the gallery at #11 was all Ladies. Three large works of larger-than-life ladies, showing off their thang. I don’t remember ever seeing a woman portrayed by Wiley like that – he has been notoriously focused on the young men until now.

Despite the regal/papal titles given to these paintings of women, the underlying message that comes with them is that ‘this is not their life’. They are not ‘portrait sitters’, like the subjects Wiley refers to in his video about the history of portraiture.

They are the ‘bitches’ in Allen’s song. (The ones who she will never be and has never been.) These are the women for who it is fuckin’ hard. Oops – I went there again.

To repeat myself, the images are seriously beautiful. They had me, as a 30-something educated white woman staring at the ornate, decorated images of young black men. Hmm

This was the difficult part about the show for me, and the subject of a long chat with the gallery staff.
(I’m very glad they were willing to have the discussion. They didn’t, to their credit, ignore the obvious racial and ethical place of art/paintings/objects/viewers in what they’re selling, and hide behind the ‘it’s just paintins, miss‘.)

So, we have this age-old dynamic.
Me: western, privileged white appreciator of young, gorgeous black specimen. Not that’s how I personally believed I was viewing these images and people, but I cannot ignore the echoes and the dynamic that had been set up. Into which I had walked and cannot avoid because of the fact that I am most of those things. Depressing.

The gorgeous patterns, the refreshingly different images of men and women surrounded by colours and framing reserved for the white elite – they’re amazing and I love them. but if *I* take one home and stick it on my wall, am I not the same as the old anthopological doyenne with her specimens of ‘the noble savage?’.

Argh! the mobius strip questioning of ‘for whom is this art made?’ ‘who has the power?’ drove me wild, in a way that I value: Is Kehinde selling out young black street stylers – his own peeps, for the fodder of white folks, again? Or is he taking back that role of representing the young black gorgeous man into the hands of young black gorgeous man and the privilege white folks just get to watch, whilst they get to be immortalised. Or something of both. Or neither.

I left the show with all those complex feelings of wanting to take a shower, to dance in joy, all desire and need to turn off all the images in my day to ignore how annoyingly complex and shit human power and relationships are.

And to that end, the power within those paintings – especially for the black collector, or one with her eyes open, is worth the 5-figure price tag that will rarely go out of fashion.

*here are a few excellent responses to that video:

– Deanna Rodger, poet wrote and performed a piece about it:
http://bit.ly/19CG9s5
– Chimene Suleyman, also a poet wrote an excellent essay:
http://www.poejazzi.com/fighting-against-the-fetishisation-of-women-doesnt-work-if-you-fetishise-women/http://www.poejazzi.com/fighting-against-the-fetishisation-of-women-doesnt-work-if-you-fetishise-women/
– Bridget Minamore made an excellent storify of women on twitter: https://storify.com/bridgetminamore/lily-allen-and-satire