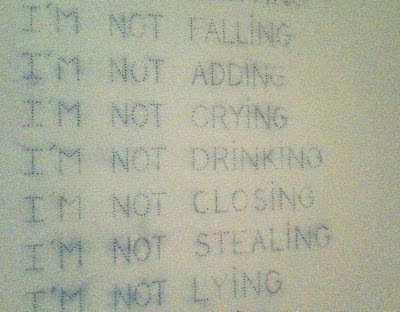 i’m in london for a few days before some exciting times at ISEA2010 and ars electronica. it’s only really enough time to catch up with the lanky midlander, the german AD, the pedant and the art historians – but i have so far managed to squeeze in couple of good shows and some great coffee.

thank god for monmouth coffee
this place was a fantastic find last time – fantastic double-shot espresso for £1.30 = that’s about $2.30 for you australians back home. which should have you squirming.

francis alys – a story of deception at tate modern 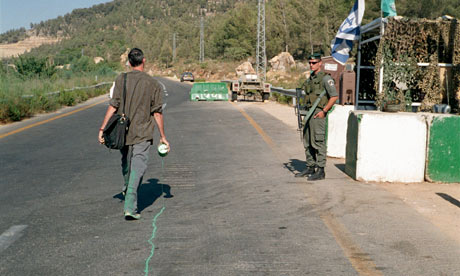 i found this title a strange one, considering alys ongoing concern with action, movement, borders and points of intersection. and more than ‘deception’, he acknowledges the ‘myth’ in all art.

however, the show itself was fabulous for me to see. i had seen a few of his works last time i was in this neck of the woods, but have been reading more and more about his work and its relation to site/nonsite/situation. and i had a whole new perspective on his work because of this.

if you’re in london and you haven’t see this work, you really should. as is an artist whose work on the concept of territory/lines of division is incredibly important –

personal highlights:
paradox of praxis i. video documentation of alÿs encircling the centre of mexico city pushing a block of ice around until it melt. it’s the most common image of his work (and one that is also at the deception and procedure exhibition i mentioned earlier), but it’s still a great image, pretty important in terms of his modus operandi and his ongoing idea of ‘sometimes doing nothing leads to something’ – the subtitle of the work.

patriotic tales with rafael ortega.
it is a fixed-frame video document of an action in a public square. around a pole (with a very sharp shadow that divides the space well), a man leads a single and increasing flock of sheep. of course i couldn’t help but think about australian artist lucas ihlein‘s goat walks for the west brunswick sculpture triennial. so the highlight was also kind of for him too.

the green line
another seminal work of his, but it also feels like one of the most important works i’ve seen. ever.
based on the 1949 partition, where israeli moshe dayan took a green pencil and palestinian XXXX took a red pencil and drew out their front lines on a 1:20,000 map of jerusalem. but what did that mean, in real terms? francis alÿs walked across that armistice area, with a tin of green paint with a hole in its lid, demarcating a border that divided israeli and palestinian alike in loaded terms.
the video is still poignant and the associated documents are quite profound. his investment of poetic action into such a highly political situation is its true value and the work’s subtitle: sometimes doing something poetic can become political. sometimes doing something political can become poetic, is an even more inspiring maxim that continues from sometimes doing nothing… 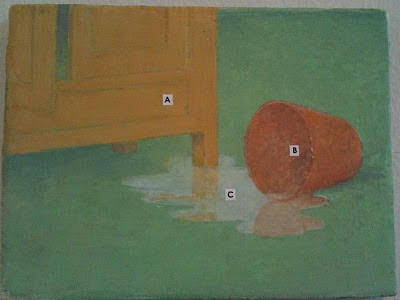 paintings: abukir and an unknown painting of a puddle.
alÿs’ small paintings are beautiful objects, which extend his actions/investigations. these two in particular stuck with my all afternoon and both look at ‘the line’ from two completely different perspectives. they illustrate the difference between old ideas of site and the concept of ‘situation’. abukir shows a hillside town divided by a wall. the hard, static wall defines a site with such rigity – there is no place for fluidity, greyness, ambiguity or flexibility in such a place. it is fixed.

i couldn’t find the name of this painting and all the images from the tate online collection have been removed, but is my favourite work of the show. it is so unassuming, but i think it really highlights the ideas and the ethos of the artist perfectly.

it is a painting of two objects: a chest of drawers (marked A) and a bucket on its side (marked B), from which a puddle of water has spilt (marked C). the water floods between both objects and their reflections not only appear, but overlap in the water. the water blurs the line between where the edge of one object ends and another begins – it dissolves the structural edge and creates a space in which both objects are included, despite being ‘separated’. separateness and territory are ideas that become murky and underrated, possibly.

at the end, i was slightly disappointed that, given alÿs’ use of postcards, that the only postcards you could buy were a book of them for £7. not a single postcard from the show could be souvenired (sp?). but that’s just me havin’ a whinge.

all up, it’s a great show and i’m really pleased that i have seen a good collection of his work all in the one place at the same time. it was an oppotunity to back-up my theoretical understanding of his work, having seen a few works here’n’there, with a nice juicy chunk of it.