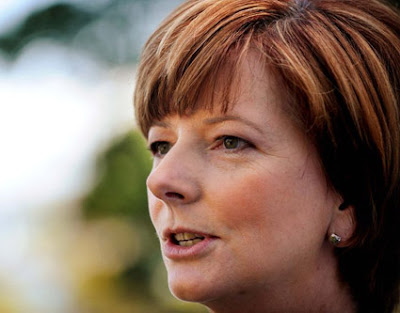 it’s already all over the twitters and the fezbook and the online papers, but i just have to say that i’m pretty flabbergasted by the political coup that happened this morning in australia.

as i was watching the football last night, i noticed a flurry of twitter activity on the #spill hashtag. given the amount of oil leaking into the gulf of mexico, my first thought was that it had something to do with the slick. i wasn’t too far off. i guess

kevin rudd has been wildly unpopular lately – even amongst supporters and voters. including members of his own party (and its inherent factions). julia gillard, deputy prime minister launched a challenge on the top gig and massive debates and closed-door discussions ensued. rudd called a caucus vote first thing this morning, but in the end stepped down, with indications that it was going to be a landslide victory to ms gillard.

you could be forgiven for skipping the above detail as ‘blah blah blah’.

but the punchline is, we have a new prime minister!

and her name is julia gillard.

For those of you in the UK, NZ, Pakistan, India, Iceland, Germany, Israel, Chile, Argentina, Malta and the former states of Yugoslavia, you may wonder what the fuss is all about. And what took us so long.

We have a lot to learn in this little country of ours, but it feels like today we made a bit of a leap towards an evolved nation. At least on a public scale, high level responsibility is no longer withheld on the basis of having ovaries and a uterus.

As much as i’m totally a fan of her on a bunch of levels, i’m actually quite suspicious of the new PM at the moment. As the Deputy and Minister for Workplace Relations, she recently has made some dubious calls regarding the taxing of miners and their billions (poor loves) and she has supported harder lines on refugees, which i’m not a fan of.

She’s not an outspoken feminist like the icelandic PM (bummer), but i’m looking forward to seeing how much things change now that the glass ceiling on the top tier has been smashed.

And even if she only makes it until the next election in 6 months’ time, it’s a start.

And when my nephew asks me in 15 years’ time where i was when Australia got its first female Prime Minister, I’ll proudly say that I was drinking coffee after pulling an all-nighter watching England scrape through to the final 16 and Australia bow out of the 2010 World Cup.