I’m sure there’s a well-written article about the shift from stables towards nomadic gallery lifestyles of pop-ups and art fairs. There will be great pieces written about berlin art week and the exhibitions on.

This is not going to be even close.

But I will be posting a few blogs about art that’s happening in Berlin this week, because I’ve got time to write at the moment.

It’s Berlin Art Week, which also incorporates art berlin contemporary – the art fair that still exists after the whole art forum debacle** (last time i was here there were six art fairs on in a weekend!).

On Tuesday night about a hundred galleries opened their new shows for the year and Berlin was kinda pumping. I only went to 2 complexes (which included about 10 galleries), but they were buzzing.
To my taste, most of it was kind of dull*, but here is a little bit about what I have liked so far.

Galerija Gregor Podnar – Vadim Fiškin
With a series of sculptural works that play on the role of the machine within the works, this show could easily be a series of one-liners. But the main work, Don Quixote Pact/v. Alliance was one work that really stood out – as enjoyable/entertaining visually, but a little more complex in terms of its dynamics (physically and compositionally speaking).

A windmill in a ‘valley’, is powered by the wind of electrical fans on a constructed ‘hill’, which in turn forces air back into the jetstream of these powered devices. It’s a thermo feedback loop. All of these forces sit atop a fibreglass ‘landscape’ (that also looks like the mould of a hot tub/spa bath).

It alluded to more than just a little optical gag –  overproduction, authority, nature, surplus – are all words that come to mind with this work, and aesthetically, was a nice combination of readymade and crafted, designed and collated. 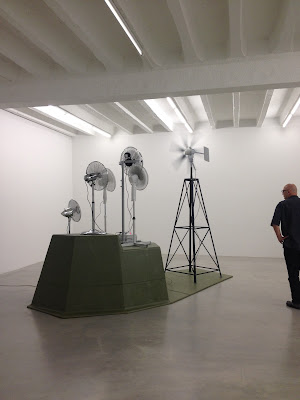 Galerie Opdahl – Chosil Kil
Amongst loads of painting-based work that I feel like I’ve seen tonnes of before, I found this show such a breath of fresh air. And mainly because of the work called Sausages – the first work you see when you walk into the space. It’s a jewellery piece, strapped around the corner of the first wall. I love a work that transgresses its form and obvious exhibition format for something a little different. I wanted to own the work straight away (Hello? Kanye? You need this piece). 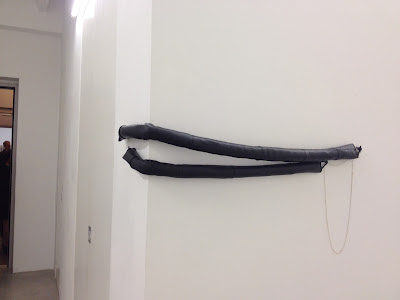 The rest of the show did remind me a little of works going around Melbourne at the moment, but this little fragment of the show – re-introducing the sausage-like leather wall sculpture and a haunting sound element – tickled my fancy. I’m happy to report that not all Berlin is monochromatic and geometric canvases. 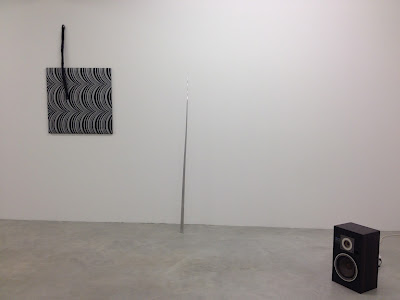 Both these shows are in galleries amongst a block of austere white cube spaces above the German heavyweight Konrad Fischer Galerie. As we all scooted up and down the stairwell, popping in and out of the galleries’ all dressed up for their first day of school, it was reminiscent of a commercial art version of the Dover Street Market in London. It was almost fun and cute. But for the Very Serious Art Crowd present.

MD72 – Florian Hecker
I like Florian Hecker’s work, but this show, Auditory Objects has completely floated my boat in a way that others haven’t. I’ve already warned the gallery staff that I’ll be back to listen again

The gallery itself is stunning and holds these minimal scultpural devices so well.

In each room across the main space hang a single speaker with an attached convex/concave mirrored piece of metal***, extending, reflecting and distorting the audience assumptions across both visual and audio planes.  You find yourself listening to the sound works from the speaker, from the cone, between the two, across the space, between the rest of the gallery – in and out of each room. And because of the staccato and sycopation in the electronice sound works, you find yourself also listening to the door opening and closeing, to the ambulance, floor creaks, etc all with the same value. 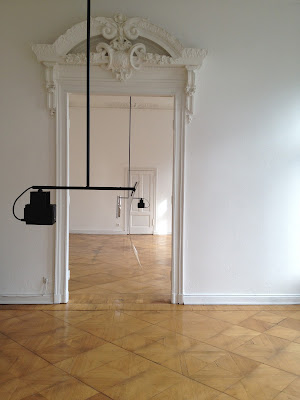 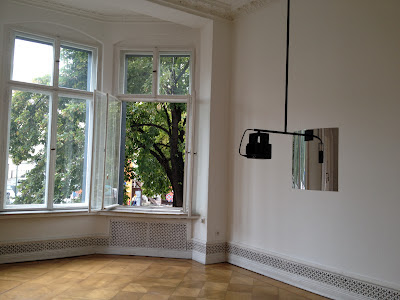 This work is complimented by a work that spreads itself through the ‘back end’ of the space – in the office, store-room and little kitchen/ante room. It unites and divides the space in equal measure with its electronic intensity and repeated speaker objects. I’m sure it drives the staff nuts, but it’s exciting to see an artist stuffing a new listening experience into the workplace.

The works are influenced by the questions of the phenomenology of sound: How is it perceived? As a discreet object, or an ongoing stream onto which we project meaning, which of course is right up my ally. And yet I’m particularly interested in the bodily and performative influence of this work, so you might hear more about it again.

Salon Dahlmann – In Action. Performance, Actionism and Concepts from the Charim Collection
Showcasing the private collection of the Charim family, this exhibition featured a whole load of VALIE EXPORT photos, documents and original artworks (yes please!), plus ephemera and drawings from the performances of Viennese Actionists and their ilk:  Günther Brus, Otto Mühl, Hermann Nitsch 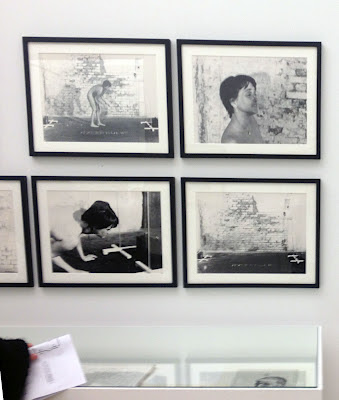 I’m not from a performance background and the recent residency at ]performance s p a c e [ schooled me.  I was like a new student with this exhibition and the works had different meaning for me yesterday that they might have had a few months ago. What hadn’t changed is the admiration of collectors continuing to collect performance work ephemera. 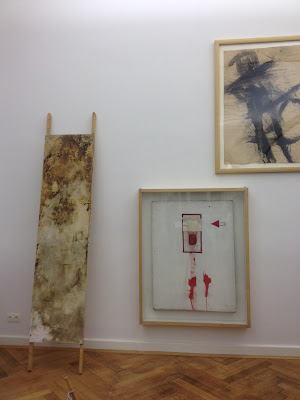 Of course not all of the works themselves were amazing. But as remnants of amazing things, and as a collection of a reference of historical significant, it was a great show. I enjoyed seeing the board on which Hermann Nitsch did those gross things with his body and animals and viscera. I liked seeing images of blood and goopy stuff from when blood and goopy stuff was properly new. Günther Brus’ action paintings, Dieter Roth and Arnulf Rainer making Paul McCarthy look like a kid, Peter Weibel being taken for a walk on a chain by VALIE EXPORT – these are seminal images I’ve only ever seen in books. 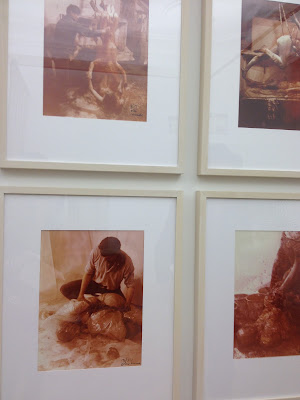 It was also enlightening, in the face of history. Quite a few of those artists no longer practice performance work.  EXPORT is probably one of the most consistent and has continued longevity – which I always find inspiring. Her and Dieter Roth (what a power combination in just one sentence) are artists I still think are total guns.

I never really liked Otto Mühl works and found his drawings of the body to be crass and slightly cariacature, but then again, I’m not so good at divorcing artists from their abusive actions, so take of that what you will. 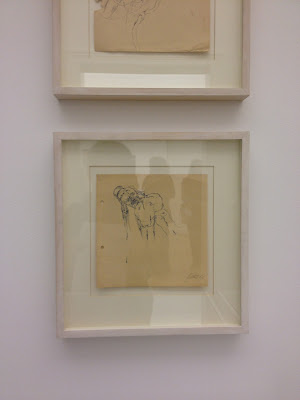 Comparitvely Brüs, who has always made beautiful imagery (more than powerful actions I believe), his drawings of skeletal figures were so touching and almost-classical in their form. They reveal a much deeper connection with the image of the body. 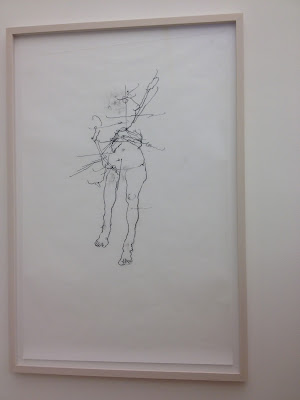 As part of the collection, it was also great see works by younger artists like Maja Bajevic and John Bock inspired by the work of these crazy performance pioneers. I think that’s when a collection comes into its own – when you see the dedication to particular artists at a particular time/place, but also to the form through the next generation.

*so much so that even my lily white legs in short shorts caused quite the stir amongst the well-heeled art clientele. I wasn’t even that racy!

** I’m going to abc today and will report back anon.

***a replication of a medical scientific device called a syncrophone – designed to alter the frequency of a listener’s brain waves.