i’m reading musicophilia by oliver sacks at the moment. from what i gather, serious psyche/neuro peeps don’t really dig his writing (just like serious philosophers treat alain de botton with a bit of disdain), but i quite like it.

the book is a collection of stories and case studies of musicality and the way the brain processes music, with a focus on anomaly or neurological disorders that fuck with the normal way of experiencing, perceiving, feeling or understanding music.

the first grand statement, which hadn’t actually occurred to me before (stupidly), was that only humans are musical beings. sound is universal, but music is specific only to us crazy homosapiens. of course it is.

and i watched that in action just yesterday.

i’m staying with my folks at the moment and their dog zephyr.
with an empty house to myself, i put watch the throne on the stereo and proceeded to dance and sing along. because it’s a shithot album and i can’t help it. 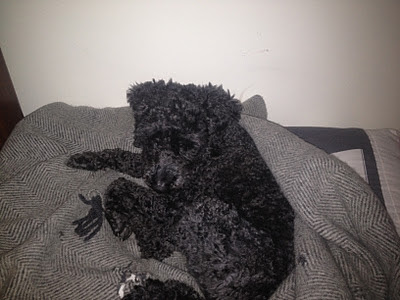 and i noticed, for the first time, a completely quizzical look from zephyr and a sense of confusion. he wasn’t sure exactly what i was doing – was i raising my voice because i was angry? is that upper register falsetto (in why i love you) trying to communicate something specifically dog-ish? and what’s with the wild arm gestures and the hip swinging around the loungeroom?

obviously my parents don’t jive around their loungeroom to jay-z and kanye west like i do, so the poor mutt is not acclimatised to such weird behaviour. and it was the first time that it occurred to me that what i was doing was kind of weird to anything other than another human (and even then…).

i love it when my world shifts a little like that.