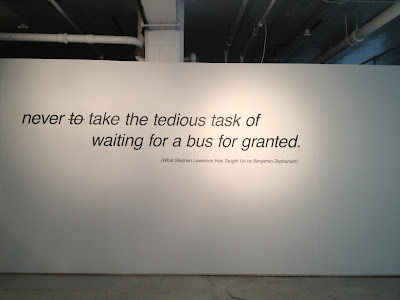 I’ve seen thousands of exhibitions and some really inspiring and moving shows. I have lists of biennales, collections, artist-run things and performance showings on this blog.

The list of shows I’ve cried at is very small. It consists of  just two: Vernon Ah Kee’s this man… this woman... at Gallery of Modern Art, Brisbane and the new addition Tahera Aziz‘s [re]locate at bermondsey project space.

You can read about the vernon ah kee response in this post. 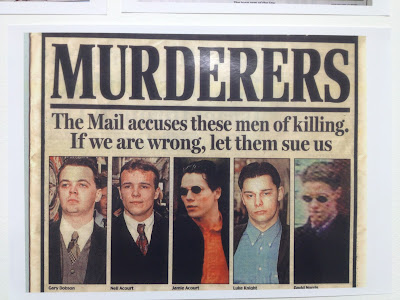 Background: twenty-year anniversary of the death of Stephen Lawrence.

Children’s deaths are never pleasant – they are a reminder about the rotten nature of humanity. And when a child’s death also exposes the cancerous way in which we protect that rottenness, it’s especially heinous.

I’m not from the UK, so my experience of this show was as an outsider who had heard only a whisper of the murder case – primarily when the killers were finally convicted not long before I arrived here. But the case and the media/culture surrounding it holds a key place in the London psyche.

The work: audio documentary
The crux of the work at the amazing Bermondsey Project Space is the audio work. It is a darkened sound space – no visual stimulus at all, but a surround-sound, multi-channel re-interpretation of the death of Stephen Lawrence.

Different characters in different sides of the room, some are more audible than others. The people at the bus stop (witnesses), the police ‘responding’ to the crime, the locals living in the area, Stephen and his friend Duwayne Brooks, people who were first on the scene and the perpetrators.

It was an intense interpretation/dramatisation/re-enactment of the events of that night, in which a young black boy was killed for his race and in which the police were responsible for the lengthy delay in bringing about justice.

As a viewer, I became a ‘witness’ to the crime with zero agency. Completely unable to change anything about the course of events playing out to my ears. Immediately I felt fear, frustration and absolute despair at the ongoing racism, violence and the negligence from the state (and their representatives).

I felt my whiteness and my complicity.
And it is painful. 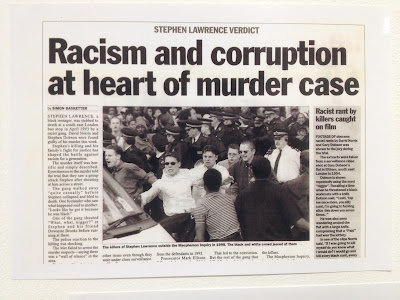 The contextual imagery, timeline and books about the case shown in the second room were also really helpful for someone like me who is outside the immediate throng of the case (including the incredibly role of the Daily Mail, risking litigation and challenging the police to charge the murderers).

It’s probably not new for those who lived through it to see all the stuff. But it is still powerful.

I also felt the nature of my privilege in that case. I have the chance to view this stuff objectively, to feel the sadness, despair, rage and then walk away. It’s not my life. It’s not my (immediate) community’s life. And it’s not the kind of thing I suffer.

Despite that, it reminded me of the countless Australian death-in-custody cases, the TJ Hickey case – the frustrating and ongoing institutional racism, especially enacted on young black men in the streets across the world.

After experiencing the work, I sat for ages and watched the astounding documentary secret policeman, which exposed the phenomenal amount of institutional racism in the UK police force. It’s jaw-dropping and unsurprising at the same time. I had never seen anything like it – certainly no Australian police force, or journalist, would dig that deep or go to that length.

I left feeling completely gutted. It’s not often I leave a show like that and it felt amazing.
As a whole, it is a work that facilitates immense feelings and to that end, it is spectacular.

There are a stack of events associated with the exhibition – sadly i had to miss last night’s screening of john akomfrah‘s handsworth songs (1987), but will be there next week for the conversation on expanding the documentary from outside the field of vision.

You must go and see this work. Really.