on a thursday evening earlier this month, i dragged my friend and fellow sound/listening/thinker/arty-type, huw, to ]performance space[ to see the third installment in a residency by martin o’brien, called regimes of hardship.

open as part of east london’s first thursdays, this final performance was a 12-hour durational work in collaboration with sheree rose.

there was a signed and fingerprinted (in blood) agreement between martin and sheree, stating that for the 12 hours, martin would hand his body over to her, for her to do anything she wants with it.

we arrived and martin had a badly-shaven head (presumably before we got there), and was being painted green with bruce nauman connotations. he was a lowly worm.

we left to eat, but returned and sheree had a costume change herself, with a little more satin and tuille – more french maid than doctor frankenstein.

she attached a leather ball stretcher, chains, fishing weights and jewels (it almost reminded me of a strange guy benfield piece). she stretched him from post to post – in crucifix formation, having wiped the green off his body somehow. there were references to ketchup, so i’m not sure what happened whilst we were out. 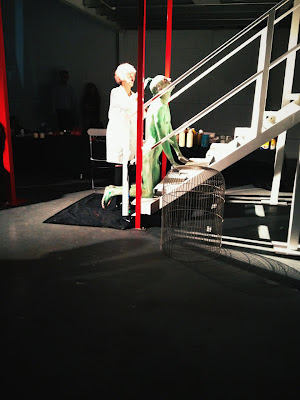 then sheree got a scalpel out and cut her initial into martin’s chest that sort of looked a bit like an ‘S’, a bit like the lightning bolt between AC and DC and a bit like half of the SS (Schutzstaffel) logo.

after being released she made martin kiss her feet and he was to become a table for the audience to eat trifle off of. i didn’t feel like doing that (which actually might have more to do with trifle than the act of degredation).

noticed sheree’s tenderness as part of the pain infliction process. the care that heightens the torture. giving and taking. and when i spoke to her after the symposium (see below), she said that tenderness and care is a crucial element to the performance of pain.

there seemed to be a level of reservation, which may have been the gallery context, exhaustion, it may  a subconscious reticence to be intimate or a reluctance to truly take the power given to her. or just my perception. apparently the work a few days later was far more unrestrained and the tension between master and slave had returned.

symposium
martin’s residency culminated in a symposium on the following saturday.

this was a clincher and put the work in context for me. i have an interest in performance art, but i clearly am not a student in it, because i learned a lot that day.

sadly i missed an intense peformance with sheree rose and martin o’brien again – apparently it was amazing.

i walked in on a bit of a marina abramovic haters club – a slight diversion based on a side remark that got blown out of proportion, but was redeemed during the lunch break – a chance to meet some other performers and researchers from across the UK.

the symposium was really well run and, for a bunch of people interested in putting their body through quite anti-social levels of distress, everyone was mostly well-behaved. there was a bit of heated debate, usually instigated by Franko B, but it made for an interesting and dynamic afternoon discussing a variety of topics, such as the audience complicity, bloody, rights to ones body, corporeal knowledge, sex, illness and the relationship between artist and medical research.

and i got called a colonialist, which was an interesting turn of events. huzzah!
thankfully, it has become impetus for a new, difficult work, so it’s all ok. for now. 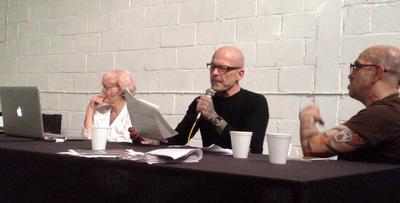 the interesting final session was actually the highlight of the day: three ‘conversations’ between artists and their medics and discussion on ethics, complicity and responsility of artists and the medical field:

martin o’brien and karen lowton spoke about their ongoing research collaboration related to cystic fibrosis and its treatment. obviously the medical research into the disease influences martin’s physical wellbeing, but his intense performance and masochistic works give the medical profession other ways to perceive the way a patient can ‘take control’ of chronic illness and the influence duration, pain and identity have on it.

michael mayhew and tuheen huda discussed how they came to work together and the importance of their working relationship over the years. michael spends a lot of time taking blood from his body, tuheen is a medic but with an interest (and qualifications) in art. during their discussion, tuheen took 6 vials of blood from michael that michael gave to people connected with the symposium, whilst they talked about the intimacy of doing that, but also how normal it is for both of them to both do what they do (tuheen take blood and michael to give it), but how shocking it still is for many of them.  i got a lot out of hearing michael’s story of his desire to pay tribute to charles drew for black history month and the  difficulty in doing so.

rita mercala and georgia testa spoke about their collaborative research into the ethics of working with illness in art. initially introduced during rita’s work in which she attempted to initiate her epilepsy in an installation/ performance context, the main project that they have been discussing is rita’s desire to create a pill that would do the same.

this one generated a lot of fantastic discussion afterwards about the right to harm oneself (operation spanner was a case i learned about), whose responsibility is it if we ask people to help us make work that will harm us and what are the other implications about the right to ones own pain.

even though it took me forever to write about, this little symposium that i accidentally stumbled upon, it has given me a stack of food for thought for upcoming works and i’m looking forward to being able to focus on them.