This week’s accidental London art trend seems to be work related to words and/or text.

John Latham and the APG at Raven Row. 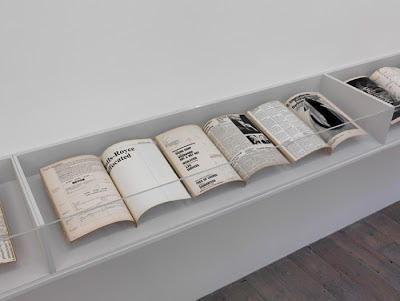 I first saw works by John Latham at the Whitechapel library/reading room about 3 years ago. It was his series of works on books and I remember being relieved that art subverted books, whilst revering them and that writing and the written word still had a place in art.

Latham is part of the Artist Placement Group – Artists that believed in being embedded within ‘society’ – organisations, workplaces, schools, etc, etc; that the concept, process and open engagement of an artist’s life was the crux of a practice worth investigating.

Raven Row is hosting a retrospective of the Group’s work, featuring great posters and text by John Latham and his placement at the Scottish Office, some beautiful currency prints by Barry Flanagan, the impressive steel sculptures/industrial interventions of Garth Evans and TV Interruptions installation/videos by David Hall, connected to his Scottish TV connection.

As part of their public programme, they featured a performance by sound artist and improviser David Toop. The performance itself was quite an intense work that was like a freight train through my skull at some parts. I closed my eyes the whole time, as it was so immense. It featured a variety of instruments, found objects, electronica and vocal distortions.
To the degree that APG embody arts practice within society an its organisations, Toop places sound expression within the body of the audience, so that the experience is visceral and affecting. 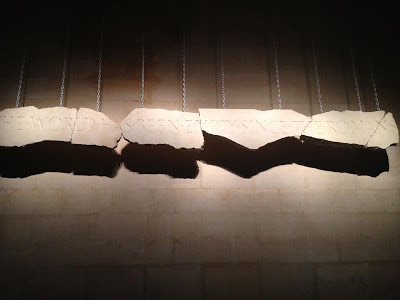 I have always cringed at the term concrete poet. In the same way I have cringed at the term music concrète. And I cannot tell you why. There is something hard and horrible about the word concret that neither poetry nor music holds. But that’s my thing and I need to get over it.

Especially because, as a concrete poet, Ian Hamilton Finlay was quite a joy to discover. He makes words into things. He makes objects into words – plays with the relationship betweent the two.

His show at Tate Britain is a series of works/words in the main gallery hall –  installations which played upon severity of The Message (as an idea in itself). His large hanging stone ‘tablets’ The World Has Been Empty Since The Romans is in equal part reassuring and ultra depressing. Crumbling and precarious, the Words are only just held – swaying, like some kind of odd jewellery around the old building’s nave. 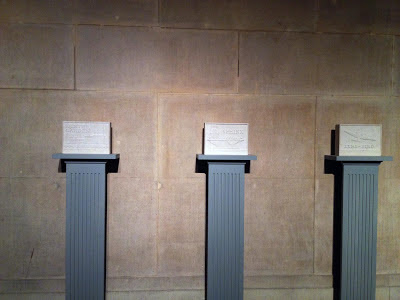 Then there were his monuments to plaques. These odd, flat columns/pedestals holding flat plaques – taken off the walls for which they were seemingly intended and bringing them into the gallery space, making them discreet objects and Art. Not just a salutory relationship between words and art, but more significant than that.

His display of worded tiles, prints and other text ephemera were a joyful discovery and, perhaps for the same reason I love John Latham – he is an artist embedded in the written word and beautifully designed things – tiles and nautical natures. 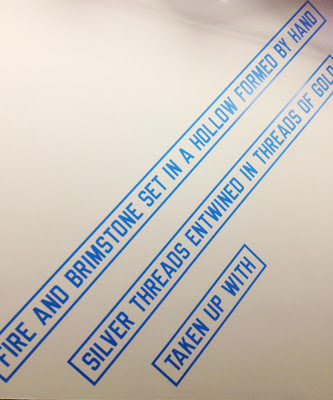 Weiner’s work is one of Tate Modern’s recent additions  on the third floor. They are seen as you wind your way up the stairs and, as such, are animated through your movement. You never quite get a full picture of them, as they are visible between stairwell and from below/above. Such fragmentation speaks to the not-quite-known of most art forms and certainly of word forms.

I saw this show so many times – en route to the cafe, the auditorium, other shows and by the end I kind of liked it and kind of hated it.
If I’m honest, I didn’t really like a lot of the text works – large letters, squished in and a little overdone.

However, I did really enjoy a single work about measurement – numbers, rather than words – as significant elements. The series of coloured canvases that stretched across the gallery wall, all of various sizes, and their widths painted across the work. All the works, lined up to present a continuous linear measurement of the space, according to the individual measurements of the paintings.
The paintings become valuable as a marker of a tangible fact and symbol of arbitrary ways in which we have marked that curious idea ‘space’. And as you walked through the space, it was like a Wes Anderson tracking shot, almost following you through the gallery.

As though such text and words and clarity-of-meaning were following you, peering into your soul a little and nagging you to work out what it is that you really want to say.