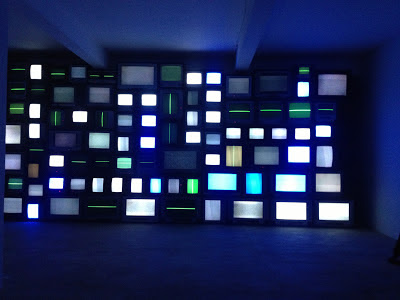 I have the great fortune of living around the corner from Matt’s Gallery.

This is especially fortunate when the day is wet and cold and the gallery’s private view is so full that people are queuing down the street in the rain to get into a Mike Nelson installation.

Which is what it was like a few weeks’ ago when I went.

The Mike Nelson and Susan Hiller shows are an excellent combination of contemporary British Art. I like both artists for different reasons, so it felt like a two-for-one deal – great bang for your buck. 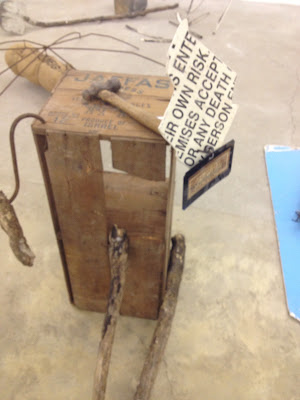 The insane passage of human bodies that preceeded More things (To the memory of Honoré de Balzac)  is mostly due to the fact that there is so much sculpture – fairly delicate sculpture – jammed into the gallery, requiring a 6-person limit. It also has the added bonus of generating a fair amount of hype and, if I’m generous, perhaps is the real Mike Nelson at work.

Especially because the work inside the gallery is kooky but not what I have come to know from his work.

Yes, there’s his wild-west aesthetic that we all know and love, a few dramatic and poignant pieces – especially an intense assemblage work featuring an Israeli produce box, Arabic signage, American Op.Desertstorm badge and an ‘enter at own risk’ sign – but not the usual installation and spatial influence that thrills me.

The element of surprise or unexpectedness in his work is not obvious, apart from the casual ‘oh, it’s a skull’ and a little more of  ‘oh, this isn’t like his usual work’ reaction, which isn’t satsifactory. It probably means I didn’t try hard enough.

Susan Hiller
On the day of intense queuing, Channels, the Susan Hiller room, was as much a physical respite from the crowds as an aesthetic balance for the Nelson work.

A largely-empty room, with the entire back wall filled with TV sets and screens of various sizes, colours and content. Mostly graphic (not uncomfortable, I mean, plain colours, lines, like graphic design), the screen sculpture conveyed the rhythm of conversations played out – a series of interviews on people’s near-death experiences.

Green oscillators, static, black screens, blue screens and the occasional flicker give an appropriate ‘backdrop’ for listening to sound works: documentary and fractured, you can dip in and out of these stories in the way that radio functions at its best. Or you can sit and stare mesmerised as your eyes wander over the faint rhythm of slowly changing screens as you listen to the whole narrative of these people’s deaths.

The place of light in the space is great, as the audience are bathed in this pale blue light, ghostly and slightly horrific (especially if you’ve ever watched either version of The Ring).

These two works together, opposed creates a beautiful and uncanny death theme running across the gallery, which I loved. The movement from this mortal coil from two different perspectives: hers from direct but calm curiosity in the active dying moments of people’s lives, to his deserted, Death Valley, departed graveyard of symbols that allude to it.

The exhibitons are on until the 14th April, so head to Mile End and check it out and feel free to pop over for a cup of tea afterwards.