whoa! what a day! yesterday was the first day of the national audiology conference in sydney. i’ve been invited here as a participant of a project i’ve been working on with a small group of audiologist in a community health centre in broadmeadows. we’ve worked primarily with indigenous teenagers to teach them and engage in education about hearing.

you may or may not know that otitis media, a disease which attacks the outer ear affects about 85% of indigenous children in remote communities. their hearing is severely impaired, which then translates to difficulties with schooling, social development, language (which is where i come in) and spatial perception.

the figures are pretty scary and i learned the true nature of it yesterday in a round table discussion on indigenous hearing health.

the numbers are not so dire when it comes to urban aboriginal and torres strait islander children, but their general and hearing health is still far below colonial australians, so we’ve been working with them to develop ways in which that can improve.

the initial project we developed was a program that involved some interactive workshops, interactive/performance art and some publications. it was, for a pilot program, pretty successful and gave us the impetus to keep delivering.

we presented a (last minute) paper about the work and have a poster as part of the conference/research section – which i have souped up with an inbuilt podcast, of course. it’s all pretty exciting and new and a little bit daunting.

i learned so much here about how the medical/scientific world works, what are the real concerns for those working with hearing/listening/sound in the public health system, who are the key organisations interested in research and how does that all fit in with private practice and/or clinical diagnosis. my mind was being blown into a hundred different directions.

at each session, i took away something relating to my area of research – something that i can adapt to, or consider working with. i also realised that, even more than i originally thought, sound in the public space continues to get even more interesting for me and is revealing even more areas of opportunity. who would have thunk!

and although it might be a bit daggy in the art world, working with community/indigenous health like this is becoming increasingly important to me personally. i’m looking forward to designing some new artworks with/for them in future.

EDIT 1: this forum with artist lucas ihlein will be interesting to attend, in that light too.

EDIT 2: i’m hoping to find links to the papers from the interesting sessions and when i do, i’ll post it on my delicious feed. so, as if that wasn’t inspirational enough, i finally met up with a fellow public/private sound/device researcher – michael walsh – who is submitting his PhD next month to Monash,and who has been researching the behaviour around sound in public, especially public transport and relevant to the use of PLDs (personal listening devices). i stumbled upon michael’s research whilst trying to recruit a fellow presenter for the architecture + philosophy lecture i’m giving at the end of the month. we have a mutual love (read: biography referrals) of dr michael bull and his essays on headphone/ipod use in public life.

we ended up trading opinions, findings and general information for an hour and a half, perched in the thoroughfare at a QVB cafe. it was so fantastic and although it would have been fantastic to compare notes whilst i was doing my masters, in a way i’m glad that i could share my information afterwards instead. i tell ya – meeting of the minds. 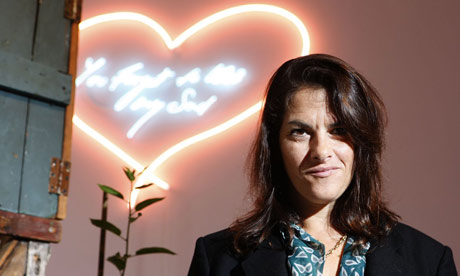 after a well-deserved home-delivered pizza, the audiologists invited me to join them at a supplier party in the v-swanky ivy bar in george st. i almost lost my shit at the tracey emin neon work in the lower foyer ‘take me to heaven’ (not the image above, which was pinched from the guardian site, and the hip penthouse bar was a real treat: sunken round lounge, cast concrete planks for the curved walls, free cosmopolitans (and they made me up a shaken orange+cranberry mocktail) and super-cute cupcakes. these audiologists are a spunky bunch, i tell you!

needless to say, i was absolutely knackered by the end of it, but man i’m havin’ a great time. i’m so grateful to the crew from dianella hearing services for their courage to work with art as a means of communicating health issues and to continue a developing relationship with me as an artist.