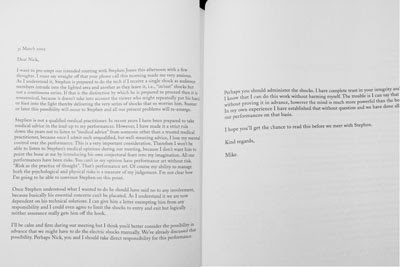 in a few hours’ time, i will start a new work that uses CIA interrogation techniques to experience what it’s like to ‘listen’ under duress and as a way to interrogate my own listening practice.

the work is influenced by a work of mike parr’s i saw years ago and i’m grateful to have recently been able to pore over the documentation from that performance, including his letters to the gallery director nick tsoutas (from artspace).

the letter gave me an indication of the process behind his performance and the level of preparation. i feel like i haven’t prepared nearly enough – i don’t quite know how to prepare for this, as it’s the first time i’ve pushed myself to this level before. i’ve done 8-hour performances before, but not to this level of imprisonment (i’m in a booth, shackled, naked and strapped.

i’ve tried to follow a little of what i read about mike parr’s process and hopefully i’ll be able to have an outcome half as beautiful and powerful as his.